A hormone is a chemical substance that is secreted by one tissue and travels through body fluids to affect another tissue in your body. Many hormones, especially those affecting health, growth, well-being and behavior, are very important to both men and women. The specific amount and levels of certain hormones change daily. 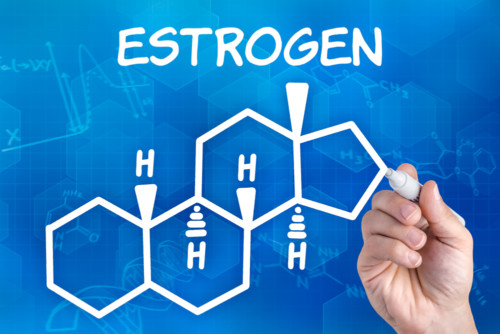 Estrogen is a class of related hormones that includes estriol, estradiol, and estrone.

Estrogen is the primary “female” hormone and promotes the growth and health of the female reproductive organs. The hormone estrogen is also important in keeping the vagina moisturized, elastic, and well supplied with blood. Release levels of the hormones estrogen and testosterone vary between night and day and from one stage of the menstrual cycle to another.

Estriol is made from the placenta and is produced during pregnancy.

Estradiol is the primary sex hormone of childbearing women. Estradiol is responsible for female characteristics and sexual functioning. However, it is reported that estradiol contributes to most gynecologic problems, including female cancers.

Estrone is the main estrogen present after menopause.

The most important hormones made by the ovaries (female sex hormones) are oestrogen and progesterone. A decrease in progesterone will have a direct impact on menstrual periods. The ovaries also produce some testosterone (male hormone).

In addition to estrogen, levels of other hormones produced by the ovaries (progesterone and testosterone – a male hormone produced at lower levels in women), are also changing during a woman’s midlife years.

It is important to note that as a woman ages past her 50’s, estrogen hormone levels will continue to decline more than testosterone hormone levels. A mix of both menopause and aging typically causes these changes that occur during this period.

Menopause is considered the final menstrual period after 12 straight months without a period or when a woman’s ovaries are removed or permanently damaged. Menopause occurs naturally (not resulting from surgery or medical procedure) between ages 40 and 60, with the average age in the developed world at 50.

However, sometimes periods of perimenopause are accompanied by hot flashes and difficultly sleeping. These changes leading up to menopause (perimenopause) are brought on by changing levels of hormones produced by the ovaries, mainly estrogen. Estrogen levels generally decline during perimenopause, but they do so in an irregular fashion. The reduced production of estrogen beginning in perimenopause can affect your overall health function directly and indirectly, such as hot flashes and night sweats, which can drain your energy. Perimenopause can last 5 years or more.

Postmenopause is all the years after menopause.

Font Resize
Contrast
Accessibility by WAH
Call Us Text Us